A legacy created over years of rich NZ history

Proudly NZ owned, our history spans over 130 years and encompasses Transport, Tourism and Adventure. The Hermitage is NZ's legacy and the safe keeper of many memories.

The first Hermitage was built in 1884, under the direction of Frank Huddleston. Huddleston, surveyor and water colour artist from Timaru, was appointed ranger for the Mount Cook area because of fears that local vegetation, especially the bush and the native lilies and daisies, would be destroyed by grazing and burning. This initial accommodation house was set in twelve hectares near the base of the Mueller Glacier, beside White Horse Hill. It was a small cob building, with a pond formed from the hole where the clay was dug for the sun-dried bricks. The present Hermitage looks out past White Horse Hill to the Hooker Valley and Mount Cook. 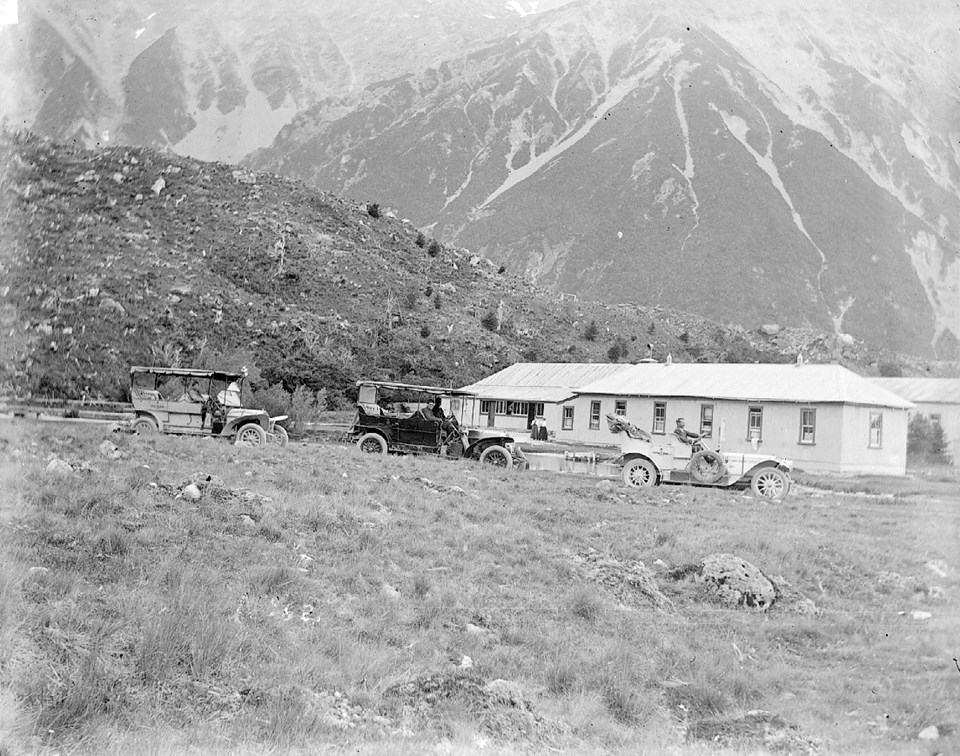 In 1885, Huddleston sold his land and hotel to the Mount Cook-Hermitage Company; which was formed to create a Swiss-style alpine village. The company bought rugged horse-drawn coaches to run from the railhead at Fairlie to the Hermitage. It took visitors three days to reach the Hermitage from the coastal port of Timaru. Huddleston remained as manager in 1894. Two years later the New Zealand Government took over the Mount Cook-Hermitage Company, then in difficulties. In 1906, the Mount Cook Motor Company began running service cars to the Hermitage. One of the first was driven by John Rutherford who drove in the first regular horse coach in 1886. The original Hermitage could not cope with increased demand for accommodation, the more so because thirty years of bad weather and fire had taken their toll on the property. As work began on the second Hermitage, the first was damaged by flood; two months later it was destroyed by another flood. 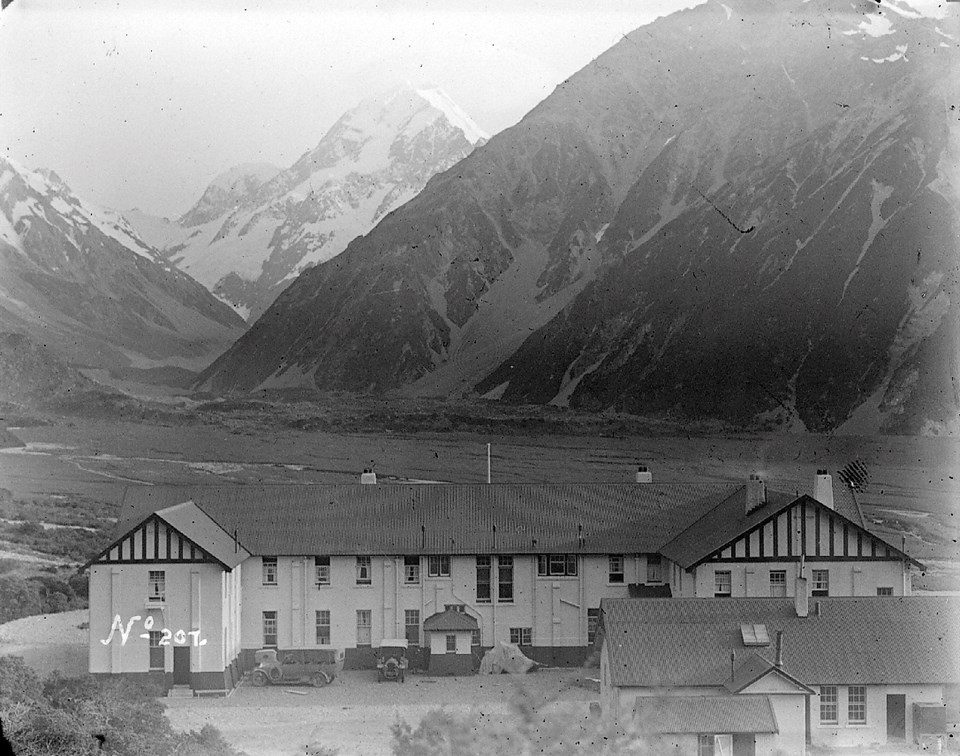 The second Hermitage opened in 1914, controlled and promoted by the then, Department of Tourist and Health Resorts. The Mount Cook Motor Company was keen to help expand the region as a destination, primarily to increase the visitor numbers to  the Hermitage throughout winter. Due to growing demand for their services, eventually the company applied to lease the property, taking it over in 1921. The Hermitage was extended, camping facilities developed and package tours offered - for perhaps the first time in New Zealand. Further extensions came in 1924. In 1944 the lease expired and the Mount Cook and Southern Lakes Tourist Company, as it become known, returned the Hermitage to the Government.

Disaster struck in 1957 when the second Hermitage was razed to the ground in a spectacular fire. The Government moved quickly to design and build a new hotel on the present site. It was operational by May 1958 and has since been extended several times. The latest in 2001 included the addition of the Aoraki Wing and a major upgrade of the public areas. In 2007 the company began to increase its tourism portfolio in the region by purchasing Glacier Explorers in October and officially opening the Sir Edmund Hillary Alpine Centre in December. This provided more activities for Mount Cook visitors to experience and continued with the acquisition of Alan's 4WD Tours (now named Tasman Valley 4WD Tours in October 2009). 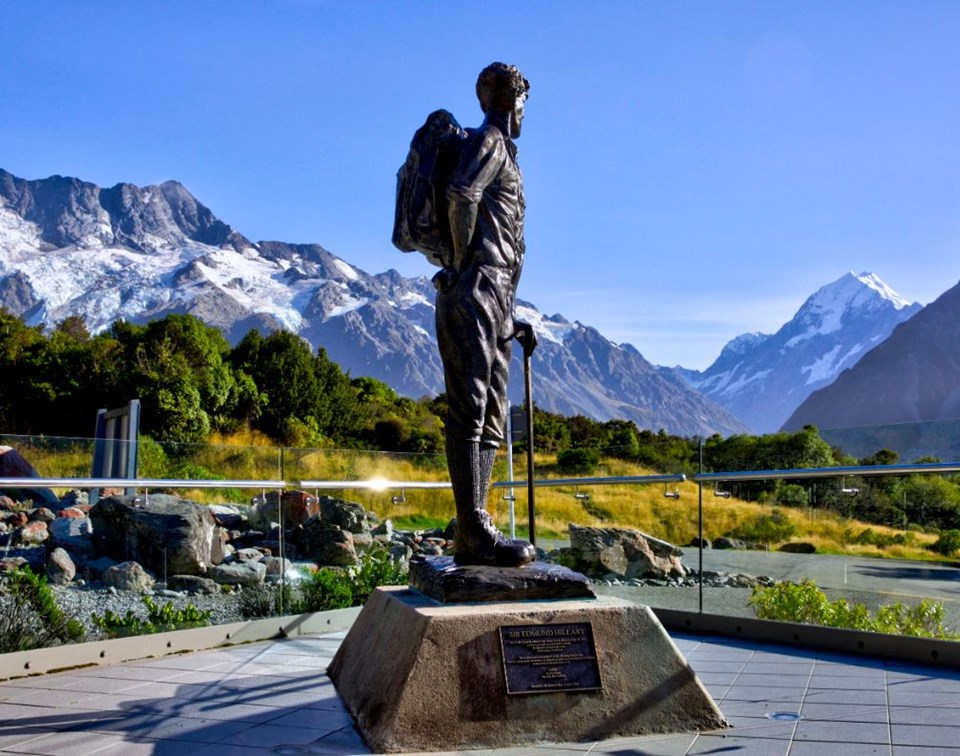 Mount Cook was a haven for climbers including Edmund Hillary who summited Aoraki/Mount Cook in January 1948 along with Harry Ayres, Mick Sullivan and Ruth Adams. Five years later he and Sherpa Tenzing Norgay became the first known people to summit Everest, the world's tallest mountain. A statue of Hillary permanently gazing towards Aoraki/Mount Cook, one of his favourite peaks, stands outside the current Hermitage Hotel. Aoraki/Mount Cook and Edmund Hillary are also depicted on the fourth issue of the New Zealand $5 note.